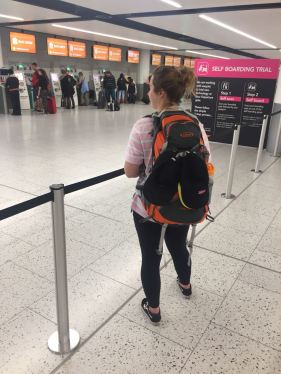 From 27th June 2018 until 28th August 2018 I au-paired with an Italian family, spending 5 weeks living in Milan, Italy and then 3 weeks in Corsica. My experience of au-pairing was very divided; with the first 5 weeks being an amazing experience, and the last 3 weeks being anything but amazing.

Before signing up to aupairworld.com, I hadn’t done much research into the what au-pairing was like, I had seen one of my friends do it the summer before and heard about her time there, but that was it, I did no research into other peoples experience and opinions, so I had no idea what to expect from it. Looking back now, I wish I had done more research and read more blog posts about peoples experiences, if I had, maybe I wouldn’t have even gone? After signing up to be an au-pair, I spoke to a number of families on the website, until there were 2 families I was deciding between, in the end I went with the family in Milan. I chose this family for a number of reasons, they seemed really friendly and kind, they liked to travel around a lot, my only job was looking after their child a couple hours a week and I wouldn’t be living with them, instead I would be living in a studio flat in central Milan for free!

My time in Milan was amazing, my host Mum was incredibly friendly and the boy I was looking after was sweet, I got on with them really well. The host Dad worked a lot, so I never really saw him as he left for work before the boy woke up and returned home after the boy had gone to sleep. Along with having the host Mum and boy around, the family had a nanny as well as an au-pair. At first I thought this was a bit excessive, but the nanny also cleaned the house and cooked for them, it also meant I had a lot of free time to do my own thing. My au-pair child had summer school 5 days a week which ran until 6:30pm, so this meant I wasn’t needed until he returned home, leaving me with the whole day to explore Milan, the host Mum also let me have 2-3 days off in a row so I could travel to other Italian cities. All of this meant I was able to make the most of Italy, seeing more of Italy than I had expected. During weekends I was always invited to a country club which had an Olympic sized swimming pool, gym, tennis courts and a spa, all of which I had full access to, and after half a day of looking after the boy, I had the rest of the day free to make use of it all! My host Mum took me and the boy to Venice, where we stayed in her parents’ holiday home and she showed me around all the locals favourite spots as well as the touristic spots. I really could not complain about au-pair life in Milan, it was luxury and I loved it!

After my 5 weeks in Milan, I was going on holiday to Corsica with the host family for 3 weeks, here I would be staying in 3 different Airbnb’s with them so I knew things would be very different than Milan and I would have less time to myself, however, I didn’t think this would be a problem after having spent 5 weeks with them treating me so well and part of their family. We stayed in 3 different parts of Corsica over the 3 weeks; Santa Giulia, Pinarellu and Calvi, I’ve made a separate post about each place. Over the next 3 weeks, my relationship with the family changed drastically and without going into too much detail about it, I’m going to try explain my bad experience of au-pairing,

Whilst on holiday with the family, I was now spending more time around the host Dad, during this time, he made me feel extremely uncomfortable by rarely talking to me, or when he did, calling me stupid and unhealthy (purely for the fact I’m British). This made ‘family’ time ridiculously uncomfortable as I would be ignored or excluded from conversations because the Dad wouldn’t want to talk to me. Along with feeling uncomfortable around the Dad, in the first Airbnb we stayed in there was only 2 double beds, meaning I was expected to share a bed with the 5 year old child, when I told the family I would not share a bed with him and would instead sleep on the sofa, they were not impressed and could not understand why it is unacceptable to expect that, but I ignored it and slept on the sofa. Another time I had an issue with the host family and sleeping arrangements was in the final Airbnb, here there were two single beds and one double bed, so I assumed the single beds would be for me and the boy. Nope, the host parents wanted the single beds and I would share the double bed with the boy. However, the host family now knew I would not do that, so instead of swapping beds, the host Mum shouted and screamed at me in front of the host Dad and boy, for being so rude and difficult. The host Mum then found a cot for new born babies, and the boy had to sleep in that for the rest of the stay, even though there were enough full sized beds for everyone…

For the 3 weeks I spent in Corsica I didn’t have one single day off, I had about 3/4 half days off, and the rest of the time I spent working from the moment the boy woke up at 7am until the moment he fell asleep at 11pm. I knew this was way too much and I tried to talk to the host Mum about having some time off, however she would become rude and shout at me, making me feel too uncomfortable to ask anymore. Whilst I was looking after the boy, I was expected to clean the house, it wasn’t in my contract but I didn’t mind, until I was expected to clean the host families toilet and unpack the host parents day bags, hanging out dirty swimwear and repacking them for the next day. I was not okay with doing this because as well as babysitting for 16 hours a day, I was now expected to clean up after grown adults. I managed to stand up for myself and politely say I wouldn’t clean the parents stuff, however, it led to more screaming and shouting in my face, and having my bedroom door shut on me to keep me away from them. By the end of the 3 weeks, the host family were finding any excuse to shout at me; having the air-con on whilst I was in my room, going to the toilet whilst the child was watching TV, spending time on the porch on my own once the boy had gone to sleep. I felt trapped in a country I didn’t know and couldn’t communicate with. A couple of days before I was flying home, the host Mum told me they would not take me to the airport, and I had to find a way to get there myself. Leaving me to somehow book a taxi in a country that speaks very little English, even though the host family spoke fluent French and could have helped me book one. Finally it was my last day as an au-pair, and instead of saying goodbye or thank you, the host family went out for the day, closed the door and I never heard from them again, they didn’t even check I got home safely.

Although my experience of au-pairing ended pretty negatively, I still had an amazing 5 weeks in Italy, so I’m glad I did it, but I would not do it again. I would recommend au-pairing to others, but make sure you do loads of research on peoples experiences before you talk to families, make sure you are 100% sure what is expected of you, both at home and if you go on holiday with them, ask where you will be sleeping (especially on holiday), try to talk to au-pairs the family have had before to find out their opinion, and have a clear signed contract with the family incase they start asking too much of you.

If you think your Au-Pair family are treating you badly, stand up for yourself and you can always quit, don’t worry about letting them down, if you need to quit, then quit. You can also visit this site to find out what you can do! https://www.aupairworld.com/en/security/rights_of_au_pairs